This photo was taken from the top of Angel’s Landing, one of the more popular hikes in Zion National Park. After reaching the top, we took in the views for a couple minutes then found a place to sit and enjoy a snack. The chipmunks in Zion have clearly learned that hikers are a good source of food, as they have no fear approaching people or their backpacks to try and find something to eat. This particular chipmunk was especially brave, not only because he scurried around inches from the edge of a cliff that dropped off thousands of feet, but because he had no problem running across the backpack which was literally inches in front of me. Sadly for him, his quest to find a snack was unsuccessful. 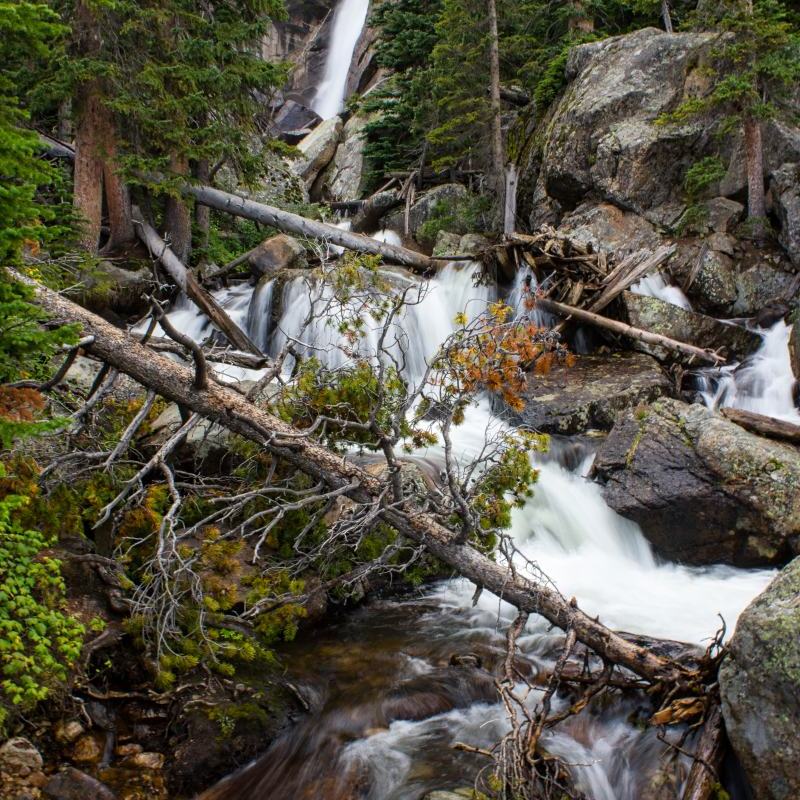 Rocky Mountain National Park is a stunning national park. The highlight, of course, is the mountain views, as the name suggests. The park also has its fair share of waterfalls within its boundaries, and while none of them match the awe inspiring views of the many panoramic vistas the park is known for, several waterfalls within the park are either easily accessible or along popular trails. This photo was taken during a hike in the Wild Basin Area, a popular hiking area which often runs out of parking spaces by late morning. We arrived in the late afternoon after a strong rainstorm had passed through, so we had no problem finding a place to park as the pouring rain had scared away a fair number of hikers. A quick side note: good rain gear in invaluable in places like Alaska and Colorado with unpredictable weather, with the proper gear a hike in the rain is no problem, without it the hike can get miserable pretty quickly. We hiked as far as Ouzel Falls before turning back and along the way I took a picture of this waterfall that I quite like. 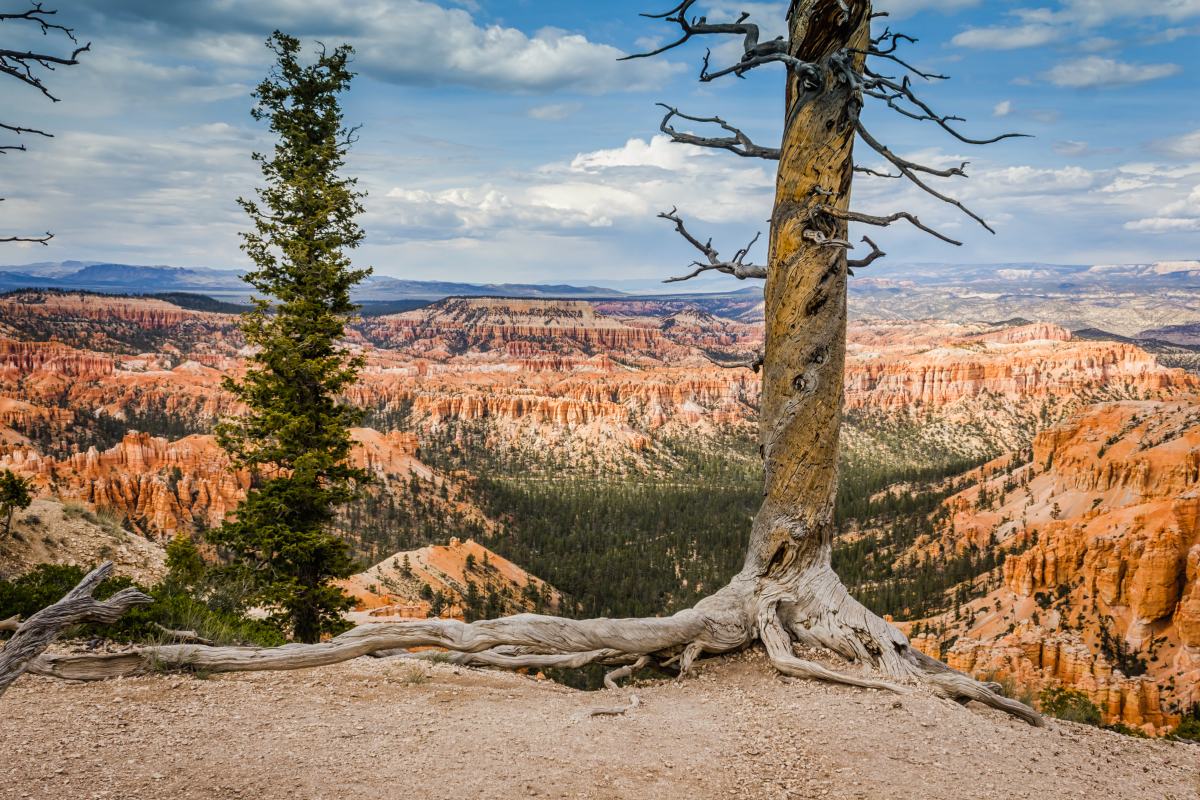 Bryce Canyon National Park is one of several great national parks in the state of Utah. One of the appealing things about Bryce Canyon is that it is a relatively compact national park and you can see the highlights in a single day (or an afternoon and the following morning, as we did) and not feel like you missed too much. This is good since there are many other great national/state parks a stone’s throw away. Bryce Canyon is known for it’s hoodoos, tall irregularly shaped columns of rock. The Bryce Amphitheater (pictured below) is filled with an impressive collection of hoodoos and several amazing hiking loops to get down into the canyon and get a closer look at the hoodoos. This photo was taken from the top of the Peek-A-Boo loop hike in the late afternoon. 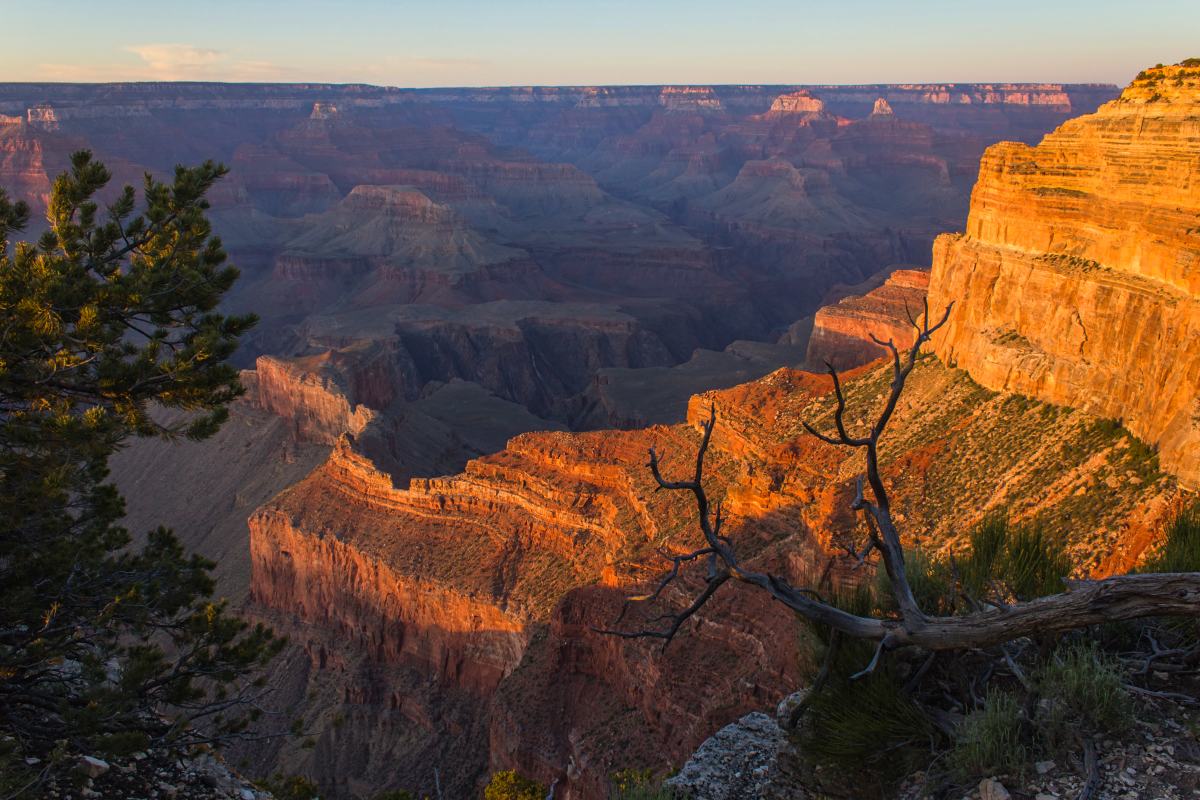 While the scenery down in the Grand Canyon is wonderful, the most iconic views are from the rim of the canyon. The views are great all times of day, with the shadows in the canyon constantly changing with the angle of the sun. The National Park Service operates a great shuttle system to get to the scenic viewpoints on the south rim, which helps control the traffic during the busy season, while the more remote north rim requires driving along narrow winding roads to get to the best viewpoints. This sunset photo was taken from the south rim, we got on the shuttle without any plan of where we were going and had the decision made for us when the shuttle stopped at this viewpoint since it was almost sunset. The sun hitting the canyon walls was as warm as it appears in this picture, and the walls being lit by the sun really contrasted with the valleys deeper in the canyon that were already quite dark.

A great sky can make or break a photo. Especially when it comes to sunrises or sunsets, the clouds need to be just right. There can’t be too many clouds, there can’t be too few, and they need to be high clouds, not low clouds. During the day, a solid blue sky can be nice but a handful of big white, puffy clouds can give a photo some pop.

This photo is of Emerald Lake in Rocky Mountain National Park. The lake is beautiful with mountain peaks in the background, snow in the valley between the peaks even in August, and a mix of trees and boulders surrounding the lake. The hike to get to Emerald Lake from the Bear Lake trailhead is moderately challenging and the trail passes a couple other nice lakes along the way. On the day we hiked to Emerald Lake, unfortunately, the sky was filled with clouds the entire day. The weather was otherwise nice and the hike was wonderful. This photo is just missing a beautiful sky to take it from being a nice photo to a really good photo, but it’s still one of my favorite photos from one of the best hikes in Rocky Mountain National Park.

This photo was taken up in Alaska on a boat tour into Kenai Fjords National Park. We saw lots of animals during the tour including seals, sea otters, puffins, bald eagles, and porpoises. We also saw these sea lions napping on the rocks of one of the islands we passed by. Sea lions seem to have a pretty good life and these ones seemed quite comfortable as we passed by them. While I could definitely handle having afternoon naps like these guys, I’m not sure I could get used to sleeping on a rock…

This photo was taken in Rocky Mountain National Park along the trail which climbs up to the peak of Mount Ida.  The trail is moderately challenging at almost 10 miles in length with about 2500 feet in elevation gain along a narrow, relatively rustic trail.  There are panoramic views in almost every direction for the entire hike as the trail climbs above the tree line not far from the trailhead.  This also means that there is no protection from storms, which often roll in during the afternoons in Rocky Mountain National Park.  It is recommended that hikers not attempt the hike if there are dark clouds nearby since lightning strikes are not uncommon.  Luckily, on the day we hiked the trail the only clouds in the sky were of the puffy, non-threatening variety.  This photo was taken during our descent from the peak.

Denali National Park & Preserve is one of my favorite national parks.  Located 4 hours north of Anchorage, Alaska, the park is a great place to visit after an Alaskan cruise or combined with a visit to the Kenai Peninsula (a couple hours south of Anchorage) on a land-based vacation.  At over 6 million-acres the park is huge, though only a small percentage of the park is easily accessible.  The single road which goes into the park is the 91-mile Denali Park Road.  Private vehicles are only allowed on the first 15 miles of this mostly dirt road.  To go further into the park, one must take one of the park shuttle buses.  While some may consider this an inconvenience, once you’re in the park it is just you, the others on the bus, and and endless nature in every direction.  This is a nice contrast to some of the national parks on the mainland United States that feature traffic jams resembling rush hour traffic, making it hard to enjoy the beautiful scenery.  In addition to awe-inspiring vistas, the park provides a great opportunity to see animals like moose, caribou, and bears in their natural environment.

The word Denali means “the high one” in native Athabaskan, an appropriate name for a mountain with a height of 20,156 feet.  Often hidden behind the clouds, only 30% of visitors to the park get to see the mountain for which the park is named.  We were very lucky and had views of Denali all three days we visited.  This photo was taken from one of the stops the shuttle buses make during their journey down Denali Park Road.  The winding dirt road serves as a perfect leading line to guide the eyes towards the mountain and the smaller mountains on either side frame Denali nicely.  With scenery like this, it’s hard to take a bad photo in Denali National Park.